Author:
European Environment Agency (EEA)
Keywords:
2018
Climate Change and European Regions
Climate Change in Europe
Original Language:
English
Date of Editorial Board meeting:
1st Editorial Board Meeting
Publication date:
Wednesday, June 6, 2018
Abstract in English:
The European Commission and the European Environment Agency (EEA) launched the European Climate Adaptation Platform (Climate-ADAPT) in 2012. Its aim is to provide a common European knowledge base to support the target audience of governmental organisations and those supporting them in developing and implementing climate change adaptation strategies and actions, complementary to adaptation platforms at other levels of governance. The need for such a platform was recognised in the 2013 EU strategy on adaptation to climate change or adaptation strategy, which is being evaluated by the European Commission in 2017-2018, as a key element of better informed decision-making that should be developed further. The objectives of Climate-ADAPT are: to facilitate the collection, sharing and use of information on climate change impacts, vulnerability and adaptation, and build a consistent and updated knowledge base; to assist the effective uptake of the relevant knowledge by decision-makers; and to contribute to a greater level of coordination among sectors and institutional levels.
Climate-ADAPT is facing a twofold challenge. Firstly, stakeholder demands vary at each governance level related to the specific tasks of decision-makers and have evolved over time. Secondly, the wide range of EU and nationally funded projects, as well as practical experience of adaptation, have significantly enhanced the amount and diversity of adaptation knowledge in Europe to be shared. Furthermore, many other relevant European knowledge platforms have emerged, including those on climate services, biodiversity and ecosystem services, and disaster risk reduction.
This report provides an evaluation of the fulfilment of the Climate-ADAPT objectives. The evaluation was carried out by the EEA as a process evaluation with a focus on learning. It focuses on the three objectives
of the platform mentioned above. The lessons learned from the Climate-ADAPT evaluation may also be of use for other thematic platforms maintained by the EEA, such as those on biodiversity and water, and for climate change adaptation platforms at national and transnational levels.
File: 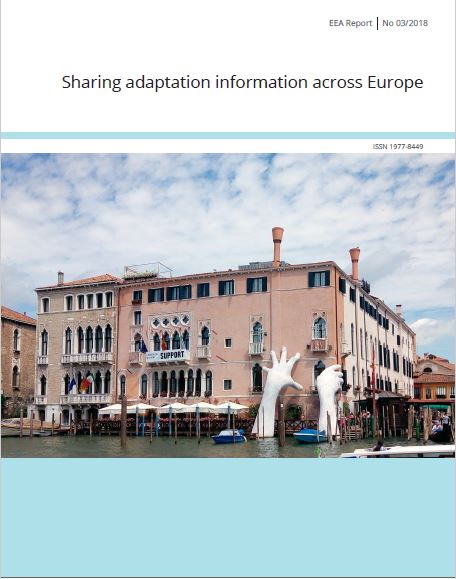 Author:
Committee of the Regions
Keywords:
European Public Finances
EU Budget
Europe's Cities and Regions
Multiannual Financial Framework
Europe and Migration
Climate Change and European Regions
Date of Editorial Board meeting:
1st Editorial Board Meeting
Publication date:
Wednesday, June 21, 2017
Abstract in English:
The EU budget is indeed facing unprecedented challenges which may have profound impacts in the size and structure of the post-2020 multiannual financial framework (MFF). One of the greatest challenges will be to handle the impact of Brexit on the EU budget’s revenues. This is not only a budgetary issue; it may well entail a shift in the ambitions of EU action as well as in its focus. Part of the foundations of Brexit are also to be found in the EU budget and should not be ignored.
The EU is under pressure to deliver in critical areas such as economic growth, environmental protection, climate change, security and migration. Depending on the role the EU will be expected or have to play, this may have considerable budgetary implications.
But the challenge is also how to adapt the budget given its limited (and unlikely to be increased) size. There is also a risk that member states, rather than focusing on Europe’s changing needs, will fall prey to pork barrel politics in order to protect their receipts from the EU budget.
File:

The Arctic, Ocean for the Future for the security and the strategic autonomy of the EU

Title Original Language:
L’arctique, océan d’avenir pour la sécurité et l’autonomie stratégique de l’Union européenne
Abstract Original Language:
25 millions de kilomètres carrés, du pétrole, du gaz et de très nombreuses autres ressources minérales situées dans une zone qui pourrait être au cœur du trafic maritime mondial dans quelques décennies, l’Arctique est une zone critique de la géopolitique mondiale du 21e siècle. Dès lors, quelle place et quelle stratégie pour l’Union européenne dans cet espace ? Le rapport disponible ci-dessous a vocation à établir une description de la situation géostratégique et des grands enjeux de cette région ainsi qu’à mettre en perspective le rôle que l’Union européenne pourrait jouer dans les prochaines années.
Author:
EuroDéfense-France
Keywords:
Arctic
Permafrost
Climate Change
Climate Change and European Regions
Europe and Globalisation
Europe's seas
Global Security
Arctic Window
Original Language:
French
Date of Editorial Board meeting:
1st Editorial Board Meeting
Publication date:
Monday, September 1, 2014
Abstract in English:
During the last decades, global interest for the Arctic, an area of 25 million square km of which 14 million for the Arctic ocean, increased due to the climate change which led to the melting of the ice cap and the thawing of the permafrost. The attention of the global players is attracted not only by energy and natural resources but also by new maritime routes. This creates new environmental challenges and leads to potentially dramatic changes to international trade, which will contribute to the globalization of this area. This evolution is one of the reasons for the growing interest of the large global players for the governance of this area, in the first place of which the People’s Republic of China, India or Singapore.
These changes went not unnoticed by the EU, which, as early as 2002 under the Danish presidency of the Council, showed its intent to be a global actor by introducing the concept of “Arctic window” into its Nordic dimension. As reaffirmed in a resolution of the European parliament in March 2014, this concern was endorsed last May by the foreign affairs Council, which considered that Europe should reinforce its contribution to the Arctic cooperation. It pleads “for an active commitment of the EU with its Arctic partners in view of meeting the challenges of sustainable growth, in a prudent and reasonable way”.
File:

Regional challenges in the perspective of 2020. Regional disparities and future challenges - Climate Change

Author:
ISMERI EUROPA
Keywords:
Regions 2020
Climate Change
Climate Change and European Regions
Date of Editorial Board meeting:
1st Editorial Board Meeting
Publication date:
Wednesday, April 1, 2009
Abstract in English:
"In this paper climate change is understood as a set of alterations in the average weather caused by global warming due to the emission of anthropogenic greenhouse gases.
Climate change is serious and scary. Amongst all challenges that are dealt with in this project it is the one challenge that potentially has the most severe impacts, globally and on Europe. The very reason for this is that climate change affects virtually every aspect of our every day life, economic, social and environmental. It is a multidimensional challenge, with its impacts not only ranging from issues like human health, supply of safe water and food, biodiversity, economic development etc., but also has impacts on all the other four challenges dealt with under this project.
The impacts of climate change can be extreme, almost unbelievable. To illustrate, pessimistic estimates predict that if global temperature increases by around 3°C above pre-industrial level additional 550 million people (approximately the size of the EU) will be at risk of hunger in world. Likewise, for the same increase in temperature, 50% of animal species may be extinct, and this is just the top of the (by then non-existing) iceberg.
Climate change is not an European challenge. It is a global challenge with effects on Europe. This has to be made aware of. Because just as Europe is responsible for safeguarding its people from the negative impacts of climate change, it has, being one of the world’s major force, to take up its responsibility for the other parts of the world. It is certainly not enough to sit back and enjoy the privilege of being born into a developed part of the world that, if let alone, could deal with any problem or challenge. Our actions affect people all over the world, just as their actions affect us. From that, if philanthropist reasons are not enough for Europe to take up its responsibility, it should do so, because the impacts climate change has in other parts of the world might have military, social and economic repercussions on the Europeans.
In the light of the severity of the impacts climate change can have, it is surprising how little is known about it in public. Sure, climate change gained public attention in 2007, when Al Gore and the IPCC won the Nobel Peace Prize "for their efforts to build up and disseminate greater knowledge about man-made climate change, and to lay the foundations for the measures that are needed to counteract such change". But still it is felt that public awareness is much too low.
Tackling climate change and finding the right policies is not only about mitigation, adaption and analysing the problem. It is also about making it known to the people, because in the end it is us that, with our every day actions, are responsible of what the future climate will be.
Task
In this spirit, and since climate change is, as mentioned, a multidimensional challenge this paper, by reviewing the current literature, aims at giving an overview of the multiple impacts climate change can have globally and on Europe. Its main focus are the economic, environmental and social consequences, firstly at the world and secondly at the European level, with the ultimate aim to derive some conclusions on how climate change affects the European Union’s NUTS-2 regions.
The remainder of the paper is organised as follows:
Chapter 2 reviews current findings on the global and European impact of climate change, also taking into account developments in neighbouring regions, likely repercussions from global effects on Europe and some aspects of adaption to climate change. Chapter 3 develops an indicator to assess the vulnerability of EU NUTS 2 regions to climate change. Finally, chapter 4 by taking into account the insights from the previous chapter the paper dares to present two scenarios of potential impacts of climate change on regions: a pessimistic scenario based on the assumption that climate change and global warming cannot be stopped and an optimistic scenario based on the hypothesis that global warming will stop at the EU’s target of a temperature that is only 2°C higher than in the pre-industrial era.
Importantly, it has to be noted that mitigation will not be covered in this paper, as this will be done in the paper on the energy challenge."
File: 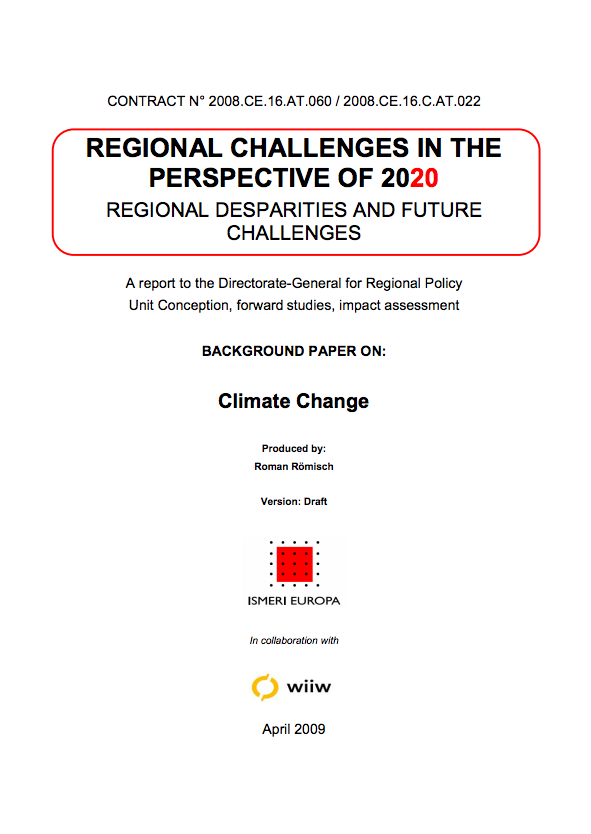