Author:
European Union Institute for Security Studies (EUISS)
Keywords:
European Defence
Military Capabilities
defence capability
Military Forces
Military Power
EU Global Strategy
Permanent Structured Cooperation
European Defence Fund
Date of Editorial Board meeting:
1st Editorial Board Meeting
Publication date:
Monday, June 25, 2018
Abstract in English:
Enthusiasts of strategic studies will be familiar with the tripartite, quasi-mathematical equation of ends, ways and means. Over a period of 18 months or so – beginning in June 2016 with the publication of the EU Global Strategy (EUGS) and culminating with Permanent Structured Cooperation (PESCO) in December 2017 – the European Union has made strides on both ends and ways for greater cooperation in the area of defence. On ends, the EUGS has made clear that while Europeans ‘live in times of existential crisis’ the EU aims to improve security, democracy and prosperity and to invest in the resilience of states and societies in its wider neighbourhood in an integrated manner, while also supporting cooperative regional orders and a rules-based global order. On ways, the EUGS indicates that the Union must develop full spectrum capabilities as part of its overall approach to foreign and security policy and it must ‘systematically encourage defence cooperation and strive to create a solid European defence industry’. On means, however, there is still some way to go before the EU has the defence capabilities required to meet its strategic objectives. Despite the publication of an Implementation Plan on Security and Defence (IPSD), the development of a Coordinated Annual Review on Defence (CARD), a European Defence Fund (EDF) and PESCO, there are challenges related to defence capability development in a Union of 28 – soon to be 27 – member states.
File: 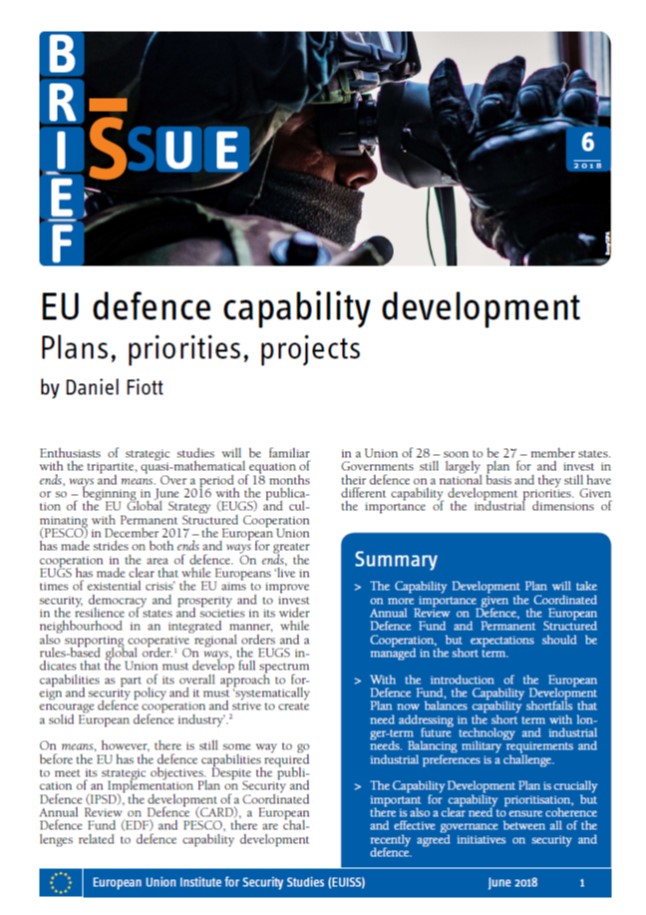 The Uncertain Trends in the “Wars” on Terrorism

Author:
Center for Strategic & International Studies
Keywords:
Terrorism
Counterterrorism
War on Terrorism
Military Forces
United States
Date of Editorial Board meeting:
1st Editorial Board Meeting
Publication date:
Wednesday, September 26, 2018
Abstract in English:
Seventeen years after the start of the first major U.S. war on terrorism – and tens of thousands of casualties and more than two trillion dollars later – the U.S. still lacks a credible database on international terrorism. There is no common official database at the interagency level, there are deep disagreements over the size and success of given threats, and there are major gaps in coverage. Each “war” on terrorism has its own approach (and usually approaches) to estimating the threat and to judging what parameters are important. There are a wide range of databases outside the U.S. government, ranging from commercial efforts to academic and NGO assessments. They often sharply disagree, and many are clearly political or ideological in character. The closest thing to an official database is the one used by the U.S. State Department in its Country Reports on Terrorism and its Annex of Statistical Information. The report and annex provide an overview of the global trends in terrorism.
File: 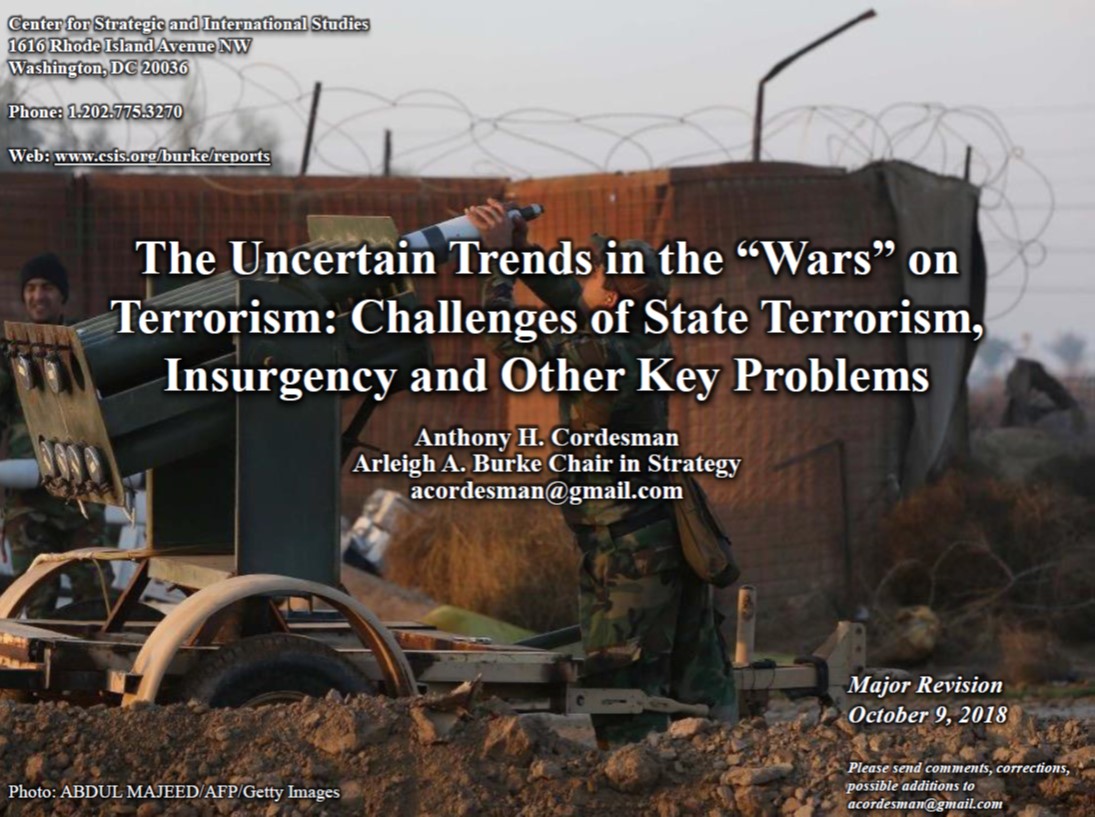 China’s Military and the U.S.-Japan Alliance in 2030: A Strategic Net Assessment

Author:
Carnegie Endowment for International Peace
Keywords:
2030
China
U.S.-Japan alliance
United States in Asia
Japan
Military Forces
Military Power
Chinese Defence
Defence
Date of Editorial Board meeting:
1st Editorial Board Meeting
Publication date:
Friday, May 3, 2013
Abstract in English:
The emergence of the People’s Republic of China as an increasingly significant military power in the Western Pacific presents major implications for Japan, the U.S.-Japan alliance, and regional security. But a comprehensive assessment of the current and possible future impact of China’s military capabilities and foreign security policies on Tokyo and the alliance, along with a detailed examination of the capacity and willingness of both the United States and Japan to respond to this challenge, is missing from the current debate. Such an analysis is essential for Washington and Tokyo to better evaluate the best approaches for maintaining deterrence credibility and regional stability over the long term.
File:

Author:
Center for Strategic & International Studies
Keywords:
Military Forces
2021
Costing the Futures Forces
Defence
Defence Budget
Date of Editorial Board meeting:
1st Editorial Board Meeting
Publication date:
Sunday, June 1, 2014
Abstract in English:
The CSIS Affordable Military Working Group, and the earlier CSIS Defense Drawdown Working Group, examined the dramatic effects of both fewer and weaker defense dollars in an effort to deal with a deep budget drawdown without significantly weakening national security. This latest report defines a set of strategy options, each with associated capabilities, gleaned from other leading think tank reports as well as the study team’s analysis. The report identifies capability priorities for the 2021 and beyond security environment and recommends a force structure for a 2021 affordable military.
File:

Author:
North Atlantic Treaty Organization (NATO)
Keywords:
Military Forces
Defence Organizations
Power Shift
Date of Editorial Board meeting:
1st Editorial Board Meeting
Publication date:
Monday, October 21, 2013
Abstract in English:
The SFA builds upon the principles described in NATO’s 2010 Strategic Concept as the basis for ensuring Alliance security in the future. It is based on recent national and international studies that address the timeframe out to 2030 and beyond. The SFA used previous ACT futures analyses (e.g. the Multiple Futures Project) as a starting point for its investigation. The report also captures the results of four separate ACT-led workshops that discussed political, sociological, economic, technological, scientific and environmental trends and their implications for NATO as an organisation and for Alliance members’ security as a whole.
File: 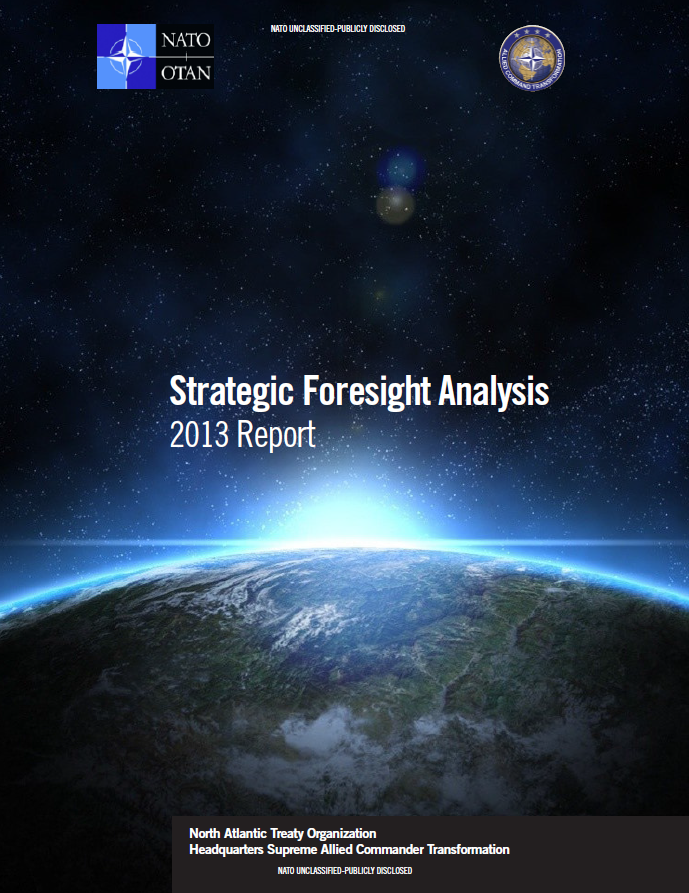 India-China in 2030: a net assessment of the competition between two rising powers

Author:
Australian Defence College
Keywords:
India-China
Chinese View of India
India's View of China
Military Forces
Date of Editorial Board meeting:
1st Editorial Board Meeting
Publication date:
Monday, October 1, 2012
Abstract in English:
This paper examines the balance between China and India in 2030. The assessment also incorporates the actions of other actors such as the U.S. and Pakistan, as well as regional actors, where necessary. The assessment uses a mix of quantitative and qualitative measures, and seeks to avoid previous assessment templates wherever possible. This is a unique competition, not previously faced by our planners, and requires a unique approach.
The paper is based on the following starting assumptions:
a. A global multipolar system is emerging with the rise of China, India, and others. With a shift in the locus of global politics from the Atlantic to the Pacific, India, the U.S. and China will define the emerging global balance of power. This triangular relationship, or tri-polarity, is likely to be the most significant aspect of the emerging 21st century global system.
b. The growth of the Chinese and Indian economies over the past decade, and in the next two decades, will lead to increasingly assertive political and military strategies from both nations.
c. The increasingly assertive nature of both nations will bring them into competition with each other, as they seek global stature and access to energy resources and raw materials to continue their economic growth. There has been, and there will continue to be, a continuing technological revolution.
This will particularly manifest in the fields of information technology, biotechnology, nanotechnology, hypersonics, and materials science. This ongoing revolution will impact on geopolitics and military balances, as well as the India-China competition.
e. Significant discontinuities are possible. The National Intelligence Council (2008) has noted that historically, geopolitical rivalries trigger discontinuities more than technological change. Technology is resulting in radical change and has been a major driver. However, over the past century, geopolitical rivalries and their consequences have been more significant causes of the multiple wars, collapse of empires, and rise of new powers than technology alone.

Key India-China Balances. The next part of the paper is an examination of key balances. These balances are neither exhaustive nor independent of each other. Significant issues will differ depending on the context, but were possible, each balance will include a basic assessment, and consider goals, key asymmetries, trends, and implications. The key balances are: 1. Command and Control Capability; 2. Nuclear Forces; 3. Conventional Maritime capability; and, 4. Conventional Air-land Capability.

Scenarios. Through the extrapolation of long-term trends from these key balances, three India-China scenarios have been be generated to examine how the balance could manifest in 2030.11 Key drivers and critical uncertainties are incorporated into the scenarios and described in detail. These scenarios are reviewed from both the Indian and Chinese perspectives based on strategic aspirations and the investment in military capabilities likely to be deployed in 2030. This also will highlight issues that earlier parts of the paper have not identified.

Implications. The last section will be an overall assessment of the balance in the India-China competition. This section describes where there are strategic asymmetries, and environmental opportunities for both India and China – as seen from their point of view - and where they might seek to improve the situation in their favor. Finally, it describes potential impacts on the U.S. as well as issues that require further examination.
File: 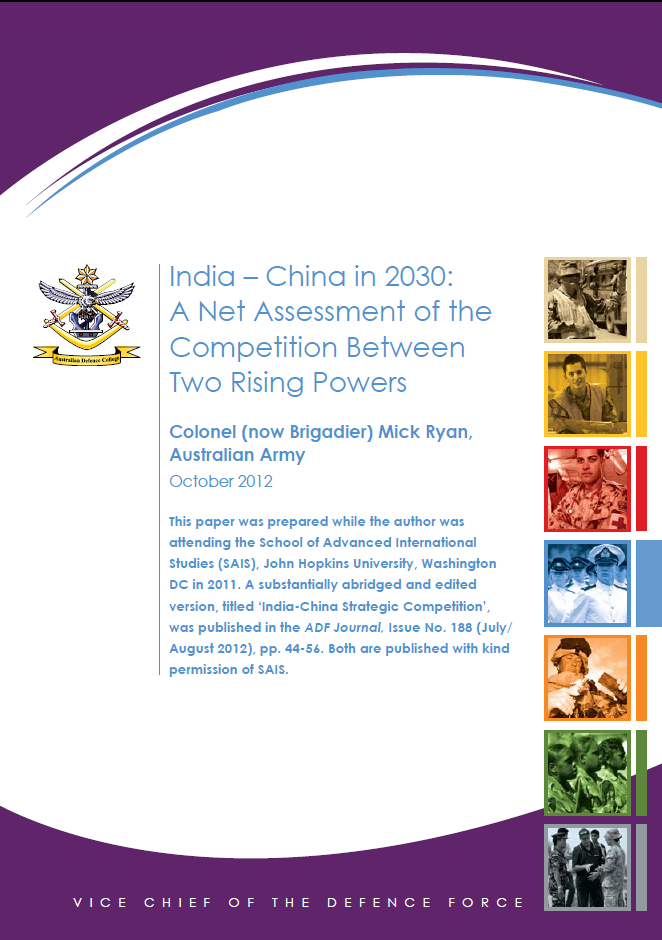