Social Dialogue and the Future of Work

Title Original Language:
Social Dialogue and the Future of Work
Author:
International Labour Organization (ILO)
Keywords:
Labour Market
European Social Model
Social Development
Social Exclusion and Social Risks in Europe
Original Language:
English
Date of Editorial Board meeting:
1st Editorial Board Meeting
Publication date:
Tuesday, May 12, 2020
Abstract in English:
Social dialogue, defined as “all types of negotiation and consultation, and also the exchange of information between or among, representatives of governments, employers and workers on issues of common interest relating to economic and social policy” has been long employed as a tool in the governance of work, with the objective of delivering sustainable economic growth, social justice and the kind of high-trust work relations that are not only valuable in themselves, but that can also improve business performance and increase workers’ share in rising profitability. It includes tripartite social dialogue, collective bargaining and workplace cooperation. Collective bargaining is defined in the ILO’s Collective Bargaining Convention, 1981 (No. 154), as “all negotiations which take place between an employer, a group of employers or one or more employers’ organisations, on the one hand, and one or more workers' organisations, on the other, for: (a) determining working conditions and terms of employment; and/or (b) regulating relations between employers and workers; and/or (c) regulating relations between employer or their organisations and a workers’ organisation or workers’ organisations.” Freedom of association and the effective right to collective bargaining are the preconditions for successful social dialogue.The ILO Global Commission on the Future of Work, which examined the transformations underway in the world of work, emphasized the need for decisive action. It considered that the collective representation of workers’ and employers’ organizations through social dialogue contributes to the public good and called for public policies that promote collective representation and social dialogue. “Collective representation and social dialogue provide the institutional capabilities needed to navigate future of work transitions [....] At company level, works councils, consultation and information arrangements and worker representation on boards are all proven mechanisms to manage the challenges of change and to allow people to exercise influence over their working lives. Collective bargaining is a fundamental right and a powerful tool for economic success and social equity, not least in times of transformational change. Tripartite social dialogue allows opportunity for the partners to the social contract to consider the broader societal issues that change brings and to guide policy responses. The ILO Centenary Declaration for the Future of Work adopted by the 108th (Centenary) International Labour Conference of the ILO states that “social dialogue contributes to the overall cohesion of societies and is crucial for a well-functioning and productive economy.” Social dialogue is not only a necessary tool for managing change and addressing the transformations underway; it also helps in addressing the long-standing problems we already face. Work in the informal economy, for example, still accounts for more than 60 per cent of the world’s employed population, exceeding 90 per cent in parts of Africa and Asia. Even in the formal sector, some workers may remain trapped in jobs that offer barely subsistence-level wages and inadequate social protection in return for long hours of hard labour in dangerous conditions. In moving forward to address the challenges of the future, we also need to solve the problems we already face by strengthening social dialogue institutions and enhancing the inclusiveness of collective representation at all levels.
File: 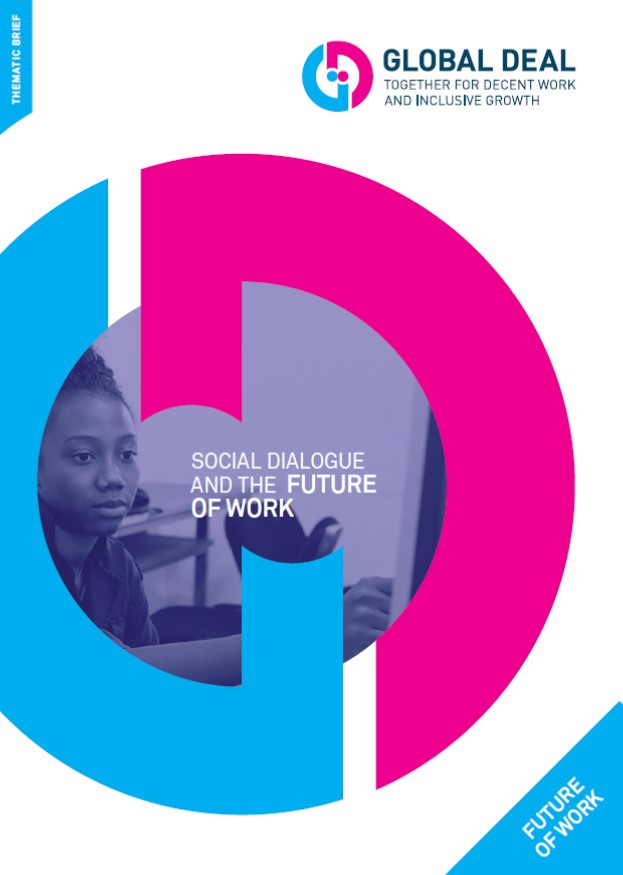 Global Trends to 2030: New Ways out of Poverty and Exclusion

Author:
European Strategy and Policy Analysis System
Keywords:
Global Poverty Reduction
Unemployment
Inequality
Social Exclusion and Social Risks in Europe
Global Trends
Future
Work
Employment
Poverty
Original Language:
English
Date of Editorial Board meeting:
1st Editorial Board Meeting
Publication date:
Wednesday, January 9, 2019
Abstract in English:
This paper analyses the issues of poverty and exclusion in the context of the major trends that characterise the present and will shape the near future. It also explores the uncertainty that emerging trends may pose for EU societies in terms of poverty and exclusion, and looks at options and alternative paths to counteract these two phenomena.
File: 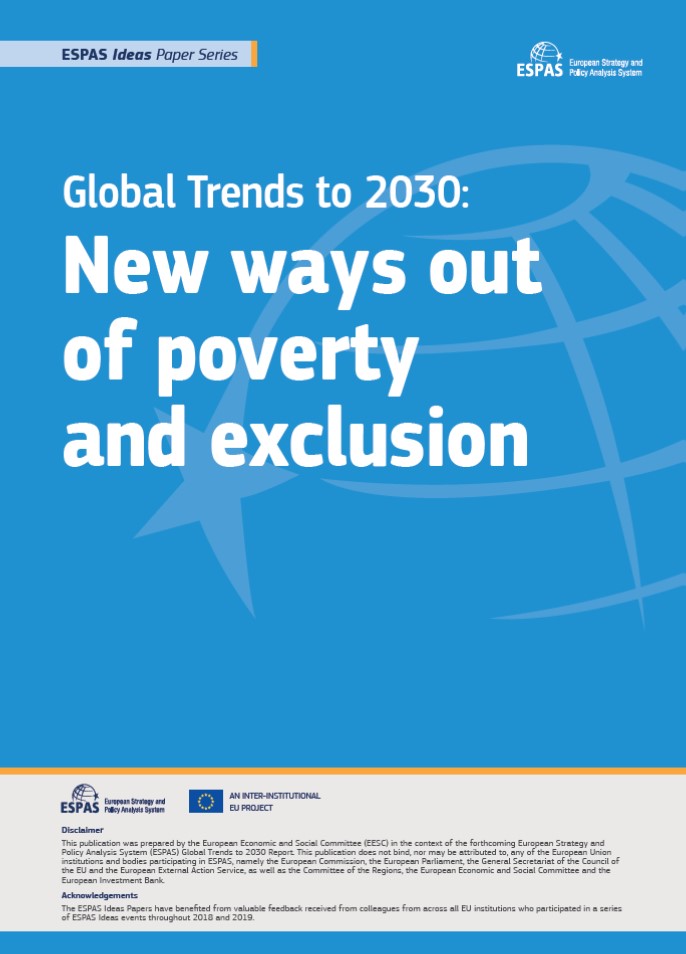 Author:
New Pact for Europe
Keywords:
2017
Europe and Migration
Security and Europe
Economic Crisis
Social Exclusion and Social Risks in Europe
Social Cohesion
Europe and Globalisation
Date of Editorial Board meeting:
1st Editorial Board Meeting
Publication date:
Wednesday, November 15, 2017
Abstract in English:
As the EU emerges from this decade of crisis, it is clear that an open and frank debate within and between member states – on the issues that concern them most and spark the deepest divisions – is essential.
It enables the development of responses that reflect the interests of all EU countries. It can also help to restore a sense among the elite and the public that belonging to the Union is still good for them and their countries – and is equally beneficial for all member states.
That is what the New Pact for Europe project has been all about: providing a platform for and fostering such debates, and exploring how the major challenges facing Europe are interconnected. It can also help to deliver solutions that will demonstrate that EU membership is still a win-win for everyone– not for the sake of the EU project itself, but for the sake of the citizens whom it exists to serve.
That process has led to the current report, which reflects the differences of perception, experience and current concerns to elaborate the key elements of an ambitious but realistic package deal. This comprehensive bargain - which covers the economic and social, migration, and security fields - could provide a basis to re-energise and galvanise support for the EU.
File: 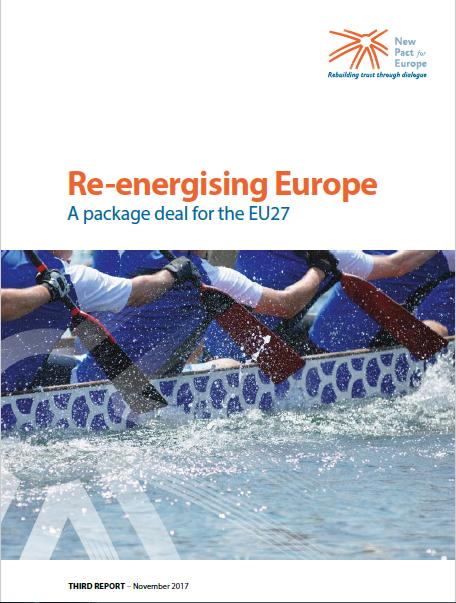 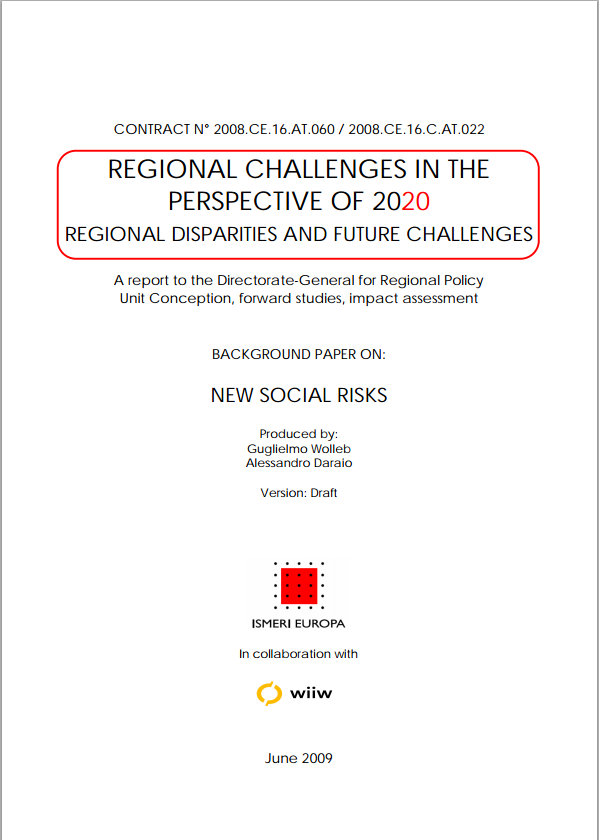